UGO! Media created a projection exposure to Lesy ČR at the National Museum of Agriculture 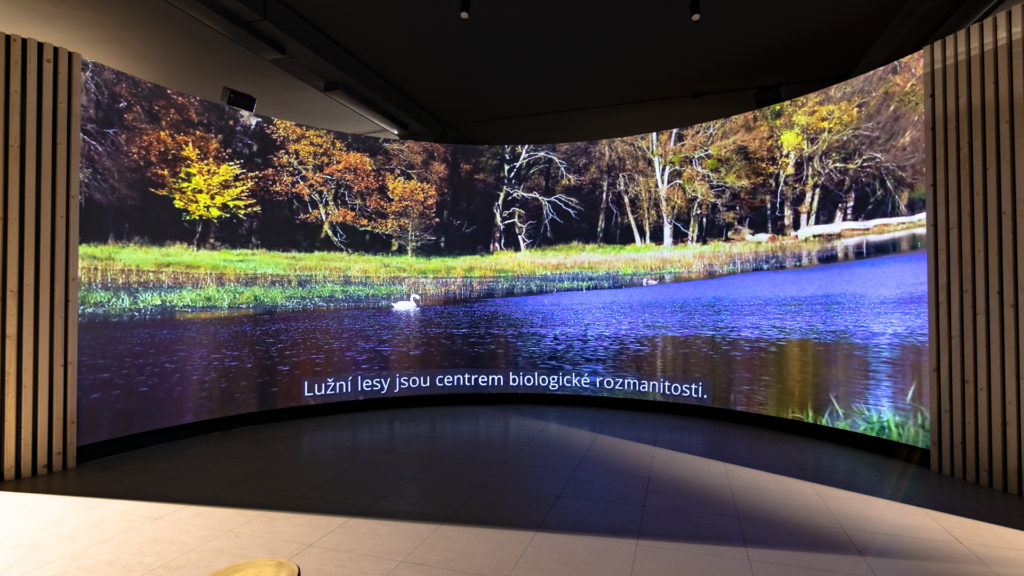 This year, Lesy ČR has prepared a new exhibition in the premises of the National Agricultural Museum. They invited the company UGO! Media to cooperate, innovators in the field of projection solutions, whose special projection films and Epson projectors have created an exhibition, thanks to which visitors will learn more about the fragile system of nature in our forests.

Return of animals and water to Czech nature

The entire exhibition is designed in the form of a complete block of curved screens, which will be mostly static and visitors will learn various interesting facts about the ecosystem of our forests. However, the Forests of the Czech Republic, which are organizing the entire exhibition, wished that the exhibition also include one large projection screen, the realization and final form of the projected content of which was given to UGO! Media.

They received nine videos from Lesy ČR, from which they managed to create three thematically focused video loops. Short videos deal with important topics such as the restoration of forests or the return of water and various native animal species to Czech nature. They also describe to the audience the process of how to prepare a forest so that part of it can become a wetland again. Videos are accompanied by the spoken word, for the deaf there are also captions. The opening of the exhibition was planned for January 2021 through a grand opening, which should be accompanied by a visit by the Prime Minister and Minister of Agriculture. However, given current coronavirus measures, the opening date will most likely need to be postponed.

In the beginning, representatives of UGO! Media met with the architects and together created a design for the entire exhibition. The actual implementation of the design solution from preparation to installation on an area measuring 10 x 3 meters took 14 days. It was very important to choose a quality projection screen that had to meet the demanding requirements for perfectly contrasting outputs, which would bring a great experience to the visitors of the exhibition.

UGO! Media opted for a special projection film DARK GREY MATT, which can be applied on surfaces made of various shapes and solid smooth materials. At the same time, combining several 150 cm wide stripes, allows you to create unprecedentedly large projection screens. Thanks to the dark grey surface, the film provides a high-perfect contrast of black and colored light without the disturbing optical properties that traditional white canvases can have. “So-called hot spots are created on ordinary projection screens, which cause the centers of the screen to be overexposed and the edges to be dimly lit. The DARK GREY MATT area eliminates these unwanted hot spots and thus enables perfect contrast over the entire projected area,” explains Marek Kolařík, founder and CEO of UGO! Media.

One projector would not be enough for the large size of the screen, so it was necessary to use two Epson EB-L1075U projectors. The overall image output will be controlled by a software application. The Resolume Arena visualization application, which can pair multiple projectors into a single image, helped control them. However, this is a list of challenges that UGO! Media had to face a struggle when installing projection does not end. Last but not least, it was necessary to ensure that a curved surface with an unusual 21: 7 aspect ratio does not distort the resulting image and that the subtitles are easy to read. This is preceded by detailed settings, so they first performed test projections, which consisted of projecting a specially created background surface from each projector onto the screen, containing projected letters, circles, and a network of horizontal and perpendicular lines. A laser leveling was also included, ensuring the perpendicularity and horizontality of the test image. Then it was necessary to align the images from both projectors pixel by pixel and then combine them into one using the Resolume Arena so that a uniform image could be created in the projection arc. After this complicated process, the projection was ready and the videos intended for the exhibition could be shown.

Epson projectors as a guarantee of quality

Along with the projection film, choosing the right projectors was no less important. UGO! Media has a long-standing relationship with Epson and highly praises the relationship. On projectors, they especially appreciate the high-quality image output, which is ensured by 3LCD technology, high luminosity and really successful lenses, which enable uniform contrast over the entire projection screen. UGO! Media also highlights the overall reliability of the Epson device and good technical support.

In the case of the exhibition for Forests of the Czech Republic, the choice fell on two laser projectors EB-10705U. “This range of powerful laser projectors, designed for the best in a fixed installation, is one of the best for this use. The device is just as large, with a high-quality color spectrum and a brightness of 7,000 lumens. At the same time, it is also an economically affordable model, which also lasts 24 hours a day, 7 days a week, so it is perfect for the needs of the exhibition, where the videos run from morning to evening,” adds Marek Kolařík.

This website uses cookies to improve your experience while you navigate through the website. Out of these cookies, the cookies that are categorized as necessary are stored on your browser as they are essential for the working of basic functionalities of the website. We also use third-party cookies that help us analyze and understand how you use this website. These cookies will be stored in your browser only with your consent. You also have the option to opt-out of these cookies. But opting out of some of these cookies may have an effect on your browsing experience.
Necessary Always Enabled
Necessary cookies are absolutely essential for the website to function properly. This category only includes cookies that ensures basic functionalities and security features of the website. These cookies do not store any personal information.
Non-necessary
Any cookies that may not be particularly necessary for the website to function and is used specifically to collect user personal data via analytics, ads, other embedded contents are termed as non-necessary cookies. It is mandatory to procure user consent prior to running these cookies on your website.
SAVE & ACCEPT
Newsletter